Wow! What a weekend! My journey home began in the blistering cold and rainy wee hours of the morning on Friday February 10th. It is one of my passions to give motivational speeches and I was blessed to get an opportunity to brush off the cobwebs and speak to about a 125 students from St Alphonsus Catholic School in Baton Rouge, La. I was really blessed to be able to do this and felt like there were higher powers giving me a message to say. The rain would not stop the 171 machine from delivering this message. The school was gracious enough to allow me and a friend, Sean Hoffman, to bring our bikes inside and set up. The kids were grades 6-8 and I have to thank the principal, Cindy Ryals, for the awesome opportunity and really working the students up. From the very beginning they were enthusiastic and ready to hear what I had to say. The rest of the staff was AMAzing and very welcoming. After the speech was over we did a little Q&A with the students and I was pretty impressed with some of the questions they asked, and was even caught off guard by a few. LOL Before we left, we took group photos with each grade, 6th-8th, and allowed the students up close to see the bikes and sit on them. It really my day and I felt as high as a person could possibly feel. Especially after hearing the kids stand up and tell me and the rest of the people in the auditorium what their dreams were. As a club racer chasing his dreams, I thought what better subject to speak on than being a dreamer and never giving up on a dream. And they old saying goes, “If you want to learn something, then try teaching it.” So I attempted to teach these wonderful kids what it takes to make a dream go from impossible to inevitable, but in the end, it’s all God’s plan. If we allow him to guide us and use us, then all things are possible. 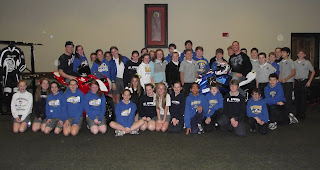 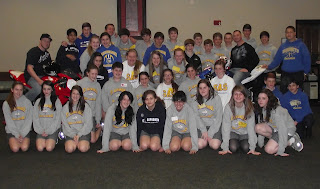 Being from New Orleans, I can relate to all the reality tv shows that are in production right now such as: Swamp People and Sons of Guns. It dawned on me as we were driving in that Red Jacket (The gun store in the reality tv show Sons of Guns) is in or near Baton Rouge. I googled it and what do you know? It was only 4 miles from the school. So we make our way over to Red Jacket, where we were met by the security officer, Captain Curt. He informed us that they were filming and we would not be allowed inside. I said I was a big fan of the show and tried to get us in, but I understand the money involved with producing and recording and tv show. We settled for pics. And Captain Curt was a professional and obviously had done this type of thing before. 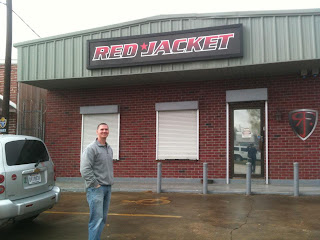 Tracktactics Trackdays was the organization that had the luxury of hosting this event at NOLA Motorsports Park. I had never ridden with 3T, but I raced against some of their staff last year. I knew the staff was some of the best in the country and I knew it would be very well planned and orchestrated, but I was in for a shocker! I completely had them under rated. Even with all the newness surrounding this track and being in a new part of the country, they were 10 out of 10. Can I give them an 11? First of all, this trackday had a lot of excitement brewing all around the country. Many eyes and ears were on alert as we tested the track for the many thousands of track riders across the country. This should be called the Superbowl of trackdays, except the next one will be the same way. LOL Let me just give you the star studded lineup so you can see what I am talking about.

Plus there was the opportunity to do a two up ride with AMA Superbike Rider Chris Peris on a brand new 2012 BMW S1000RR. I finally had the courage to do the two up ride with Chris so I could see the difference between my style and his style, with his style obviously being a lot better. Chris is an incredible rider. I asked if I could put a camera on the bike and he said sure. We set out on our journey and I came back with a smile from ear to ear. I think everyone should do something like this. It was amazing how hard and late he could brake and yet how smooth he was in all his inputs. Getting on the gas is a part of my game I struggle with, and he definitely showed me how hard you could get on the gas. In the video, you can see him touching his knee down with me on the back. That is pretty impressive considering the weather conditions and lack of grip from the cold, rain, and wind. 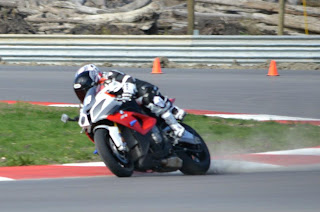 The weather forecast suddenly changed from a mid 60’s and sunny weekend to a blistering cold and overcast weekend with wind gusts reaching 30 mph. Saturday brought excitement to many fans, friends, and riders alike as we embarked on this journey to NOLA Motorsports Park; a brand new facility and race track that has the potential to be World Class. Even in the early stages of development, this place looks AMAzing. The layout of the North Track is one of the best in the country. For what it lacks in elevation change, it makes up for with speed and camber. As you enter Turn 8, you are approaching speeds of 140-150 mph and still carrying triple digits before you get on the brakes hard at Turn 13. Plenty of runoff makes this one of the safest tracks in the country as well. I think the tally of the weekend was three or four wrecks, and to be honest I didn’t know there was one. The staff kept the trackday on schedule both days. Maybe that is why, because normally crashes back the schedule up. Something new was a mid day track walk where whoever was interested could be trucked to certain corners as some of the AMA Stars did hot laps. It was perfect to see how hard and fast they get in and out of corners. I cannot wait to embark upon NOLA again in May with Tracktactics and take advantage of all the "Extra" goodness they offer with their trackdays. I got a free shirt for signing up for both days, and a free lunch both days. The lunch was catered by a trackside vendor. You had your choice of type of deli style sandwhich, two bags of zapp's potatoe chips (My favorite in the world) and a drink. I chose water over soda.

All in all this type of weekend could easily cost someone in the neighborhood of $600-$700 dollars. I paid $400 with a discount code 3T171 (you can use it if you sign up for any of their events) I feel like I owe them something, so how about a BIG "THANK YOU TRACKTACTICS TRACKDAYS" See you guys again REAL Soon!
Posted by Dean Dufrene at 12:44 PM 1 comments