Next Moto Champion-Could it be someone you know?

Every time I go to the track I am amazed at the youth and how fast they are. I was listening to a favorite radio station of mine and they were releasing the next moto champion for 2011 and giving away custom pilot leathers/boots and a 4 day pass to Collin Edwards' bootcamp.

I was surprised to hear Austin Gore (CMRA #69) was runner-up for the second year in a row for 150cc 4 stroke/85cc 2 stroke class. When it came down ot it, the reason Aaron didn't win it was because his competition also raced another organization against another talented rider that the company had been watching.

All of this talk made me think of a good friend and a very young and talented rider-Jose Silva. Jose is 17 and very fast. He was bumped to expert after his first year of racing but decided to protest and stay novice. While I respect his decision, I know Jose has aspirations to be much more than a club racer, and hope he choses not to stay novice for very long. He has the talent to move up to expert and get the much needed attention and face time so he can start to gain the sponsors needed to help him acheive his dreams of being 'thenextrossi'

He started his 2011 season by going to Las Vegas and racing with WERA West. Jose walked away with three victories-Mediumweight Solo, C Superstock and B Superstock. He intends to continue his success the weekend of February18-20 at The Mercedes Benz Course of Sugarland, better known as MSR-H in Angleton, Texas for the CMRA 2011 Season opener.

So here's to Jose and his awesome start to a young racing career where the sky is the limit! Go get em Jose! 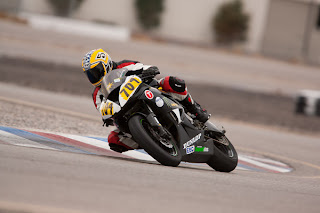 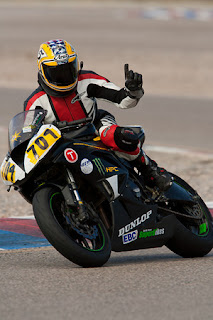